The seatbelts were buckled as Transition year students took part in what was an "eye-opening" experience of the importance of road safety here in Ireland given by the RSA (Road Safety Authority). They also learned about the role of the RSA and the need for driver training to a high standard and what's involved in getting a driver permit in Ireland. Students had many discussions following the workshop, leaving a lasting impact. 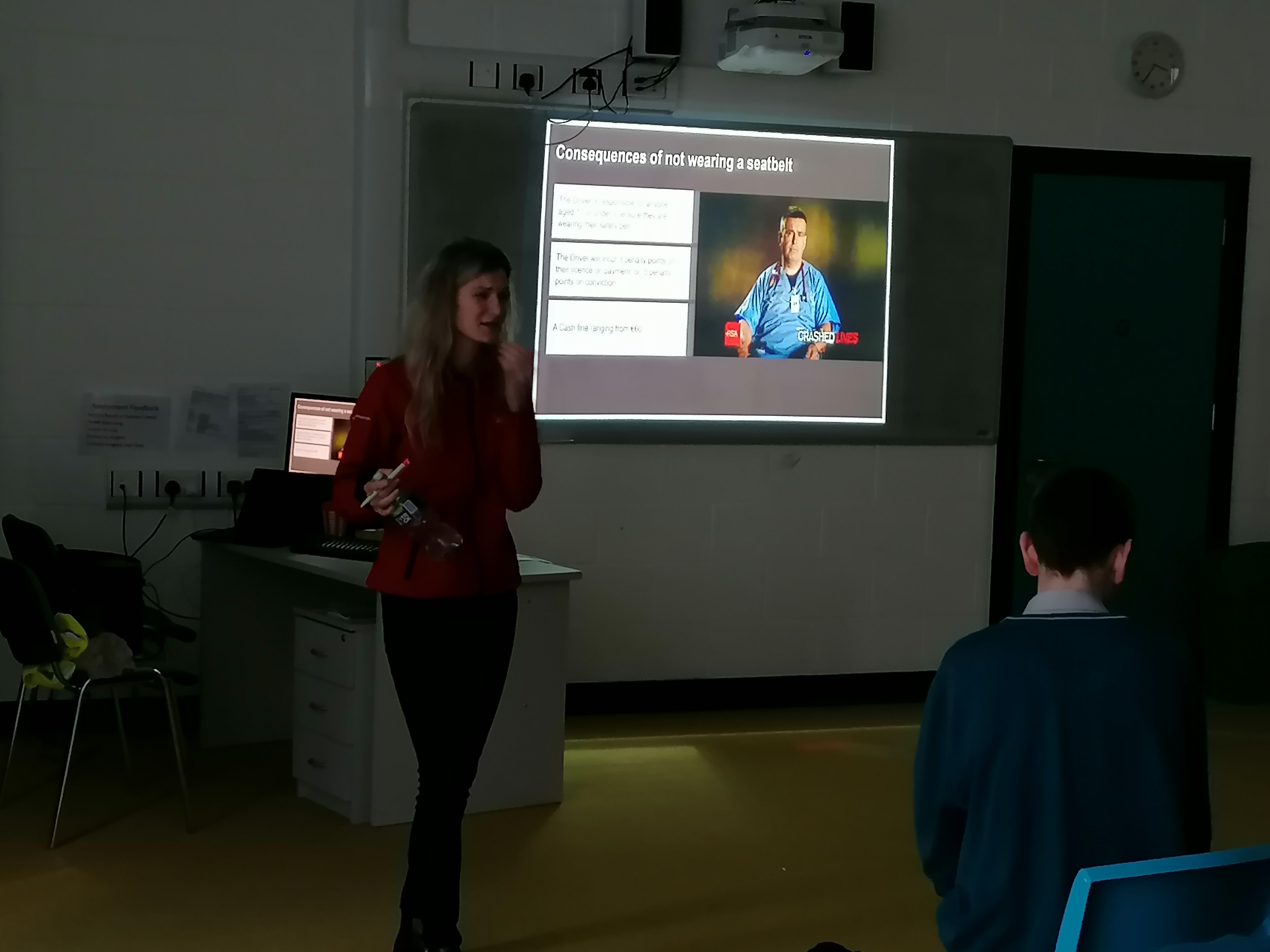 Students were more than amazed to witness first hand a talk about sign language by a Deaf Person. Students discovered that although people who are deaf can use sign language, they often rely on an ISL interpreter to be able to communicate to people who don't know ISL. It certainly inspired students to learn ISL and was rated as one of the top workshops they had attended as part of their Transition year program. ISL is used in television broadcast and students felt it should be made more readily available in schools considering almost all students knew of someone who was deaf.

Transition years took a strong case in December with the arrival of James Fahy to the school. A full day workshop allowed students gain a valuable insight into the whole area of Law here in Ireland. They discovered the difference between solicitors and barristers, the different types of courts depending on the amount of the claim and all the various other law terminology. They heard stories of various cases, some quite serious and some a little more humerous and students were all the time amused by the quick-wittedness of the speaker, James Fahy. Discovering the age of reason in Ireland is 12, students were more than a little shocked. The students took on various courtroom roles and given a scenario had a very enjoyable and challenging time role-playing the case.

An interesting and active day was in store for our Transition year studenets when the Irish Wheelchair Association visited. The students had a talk about the impact on people who are wheelchair users in society. Following this, students got to experience first-hand what it was like to use a wheelchair. Students were given the chance to first maneuver the wheelchairs around obstacles which seemed like an easy enough task to some students. However, they then had to do the same task again, but this time with a basketball which proved a bit more challenging, especially when the basketball had to be passed and fell to the ground before they had a chance to catch it. Students practised this skill and progressed to play a game of wheelchair basketball. Needless to say, there was a lot of stiff arms after the workshop was completed.

Transition year students received a very detailed talk from Focus Ireland and what the charity do in relation to helping the homeless. They learned the impact it has for over 10,000 people here in Ireland and the struggles that come alongside not having somewhere to call "home". They were made aware of the "hidden homeless" that exists in our society as we only see a small minority of the many homeless people on the streets. Being such a talked about subject in the media and among people in general, we look forward to seeing what the students have in mind for helping the homeless in our community in the near future.

Our transition years have completed the Meath GAA Super Games Workshop in September during which they were taught about refereeing, PR and coaching. During the month of October, they have been busy getting ready to hold an in-school Gaelic Football blitz between first year students which will take place after midterm. They have since been working hard and coaching the first year students each week in preparation for the blitz. We look forward to seeing all their hard work unfold. 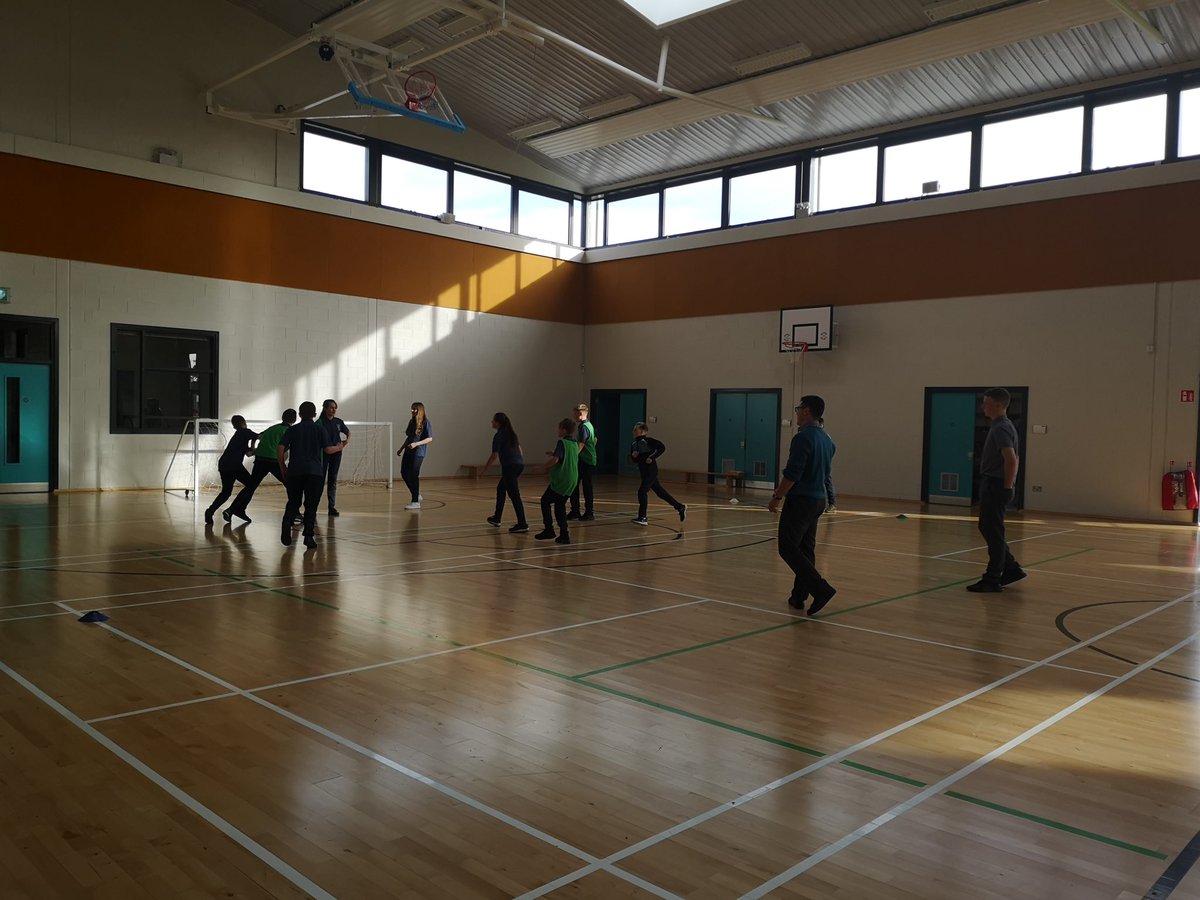 Well done to all our Transition years who took part in CPR training and successfully received their CPR/AED certificates.

Transition year students put their heads together at their first Enterprise planning day following their workshop with Meath Local Enterprise Board. Ideas were discussed, modified, some were even abandoned as they learned how to correctly put their initial ideas into fresh ideas that can be brought forward into a realistic goal

Transition Year student’s joined over two hundred students from various schools in Trim Castle Hotel for an Enterprise workshop on September 9th. It was a very interesting and fun day for both students and teachers who attended. The students participated in various activities throughout the day; group brainstorming, learning about different multinational companies and design and branding techniques. They were also shown different methods of witty and successful advertising campaigns which companies have used in the past.

The students participated in many team activities throughout the day, where they were given the task of designing potential products to invent as part of their Enterprise project. One student in particular gave a presentation of a proposed product design to a room of over two hundred students. This was a fantastic achievement. He gave a fantastic presentation and showed no sign of nerves!

The Transition Year class must now invent, design and present a product. They must then present their proposal to Louth Meath Local Enterprise Office for approval. We look forward to seeing their ideas!